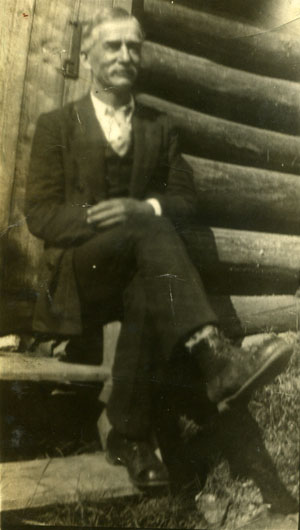 My third grade teacher, Mrs. Wright, had a wooden box painted Kelly green where she kept a collection of pictures she had cut out of magazines and mounted on colorful construction paper. Every now and then she would pull one of the pictures out, lean it against the blackboard, and say, “Write a story about this picture.” My green wooden box is my computer, containing scanned photos from albums my father and his father put together. I have several favorites (this week’s prompt), but decided to feature my great-granduncle Larkin Deaton. Maybe it’s the name that tipped the vote in his favor, or maybe it’s his resemblance to actor Sam Elliot.

Josiah Larkin Deaton was not a gentleman farmer by any means, but from this picture (dated 1930) I imagine him as gentlemanly. Sitting on the stoop of a log building in his three-piece suit and tie, he looks amused. Since this picture was probably taken at the Deaton Family Reunion, he could be anticipating the feast to come, or watching his grandchildren playing in the yard.

Uncle Larkin, the second child of James Cornelius Deaton and Elizabeth Jane Gillette, was born on 18 Oct 1856, probably in Mecklenburg County, North Carolina, since he was listed in the Western Division of Mecklenburg County in the 1860 census. He had nine siblings, four brothers and five sisters, one of whom was my father’s maternal grandmother, Martha Virginia Deaton.

In 1870, when he was 14, Larkin was working as a farm hand with his father and brothers. The family lived in Mallard Creek Township, which is in the northeastern part of Mecklenburg County. He had not been to school and could not read or write. This was during the Civil War Reconstruction Era and life could not have been easy for his family as land and crop values declined; an education was probably not high on the list of things to do.

However, life moved on, and by 1880 Larkin had learned to read and write. He eventually met and courted Ida Auton. They married on 19 February 1880, in Mallard Creek, Mecklenburg County, North Carolina. Ida was 14 years old. By June they were living in Long Creek Township (just west of Mallard Creek Township) where Larkin was farming.

Over the next 24 years the couple had ten children:

By 1900 Larkin owned his own farm, mortgage-free, in Ironton Township, Lincoln County, North Carolina, the next county to the west from Mecklenburg. He lived on and worked that farm for the rest of his life. Daughter Ora married in early 1900 and moved out of the house by census time in June, but there were still five kids at home. Daughter Thrasy married in 1906, and Larkin and Ida’s two youngest children were born by then, giving them six children at home at the time of the 1910 census. By 1920 all the kids except Edna and Baxter had left home, though Baxter had married and brought his bride to live on the farm. Ida died in 1925 of pancreatic cancer. By 1930 his youngest daughter had married, and she and her husband were living on the farm with Larkin, probably looking after her dad, and all the other children were out on their own.

Larkin died from myocarditis on 26 June 1932 in Ironton at the age of 75. His grave is in St. Matthew’s United Church of Christ Cemetery in Lincolnton, Lincoln County, North Carolina.

This entry was posted in 52Ancestors, Deaton. Bookmark the permalink.